“In our world today, we easily develop dislikes and misunderstandings of groups we have had no direct contact with. We have received many Arab student groups in our home in Edinburgh. They learned something about us and we certainly learned much from them. In emphasising the beliefs and ideals that we share rather than our differences, these exchanges are a vehicle for building bridges between the Arab world and the UK.

The conflict between Israel and the Palestinians, the recent war in Iraq , and the ‘War on Terror’ are all issues which underline that this need is as important today as when BAX first started.

One of our Arab visitors saw these exchanges as ‘destroying stereotypes’. Without direct contact we cannot know what feelings others have towards us, and fear and mistrust easily flourish. With direct contact, we discover our commonalities, the aspirations we all share. Before the moral demands of our respective faiths, we can all admit shortcomings, and our experience is that acknowledging the wrong on one’s own side can be a starting point for building trust.

There is no doubt that the current generation in the Middle East is still struggling with the implications of decisions made in Whitehall in the first half of the 20th century. In the light of this, whatever policies governments may pursue, we believe that it is vital, as much for Britain as for the Middle East, that the British people does not turn its back on these responsibilities. We believe that the proper response is to find ways of offering genuine service to all the peoples of the Middle East. Over the last 36 years, this programme has offered many people just such an opportunity.” 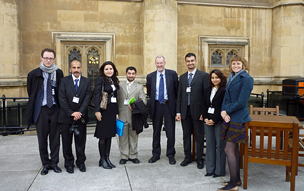 Outside the Houses of Parliament 2010 ..