“It has been a pleasure to have been involved with this organisation since 1992. I would describe it as small but special and splendid, for there is a considerable measure of idealism behind it.

It seeks ‘to establish firm links of trust and respect between the future leadership of the Arab countries and the West, and in particular, Britain ’. I know of no other organisation that claims to do that.

Of course, the key to success, when the numbers involved are so small, is to get the top calibre of student. They are selected not only for their academic abilities and personality but also, it is hoped, for their compatibility with the organisation’s ambitious aims. Of course, we do not always succeed. But it is good to find in the list of former delegates many moving upwards in industry and agriculture, in medicine, in education and research, in journalism and in the World Bank.

It is easy to wonder how much our worthy efforts really achieve. At the most we may have some influence over a few hundred students on each side out of populations of many millions, and this at a time in history when the forces of conflict, hatred and evil appear so well organised. Perhaps we are only bailing out a leaky boat with a teaspoon. But in the middle of the ocean I would prefer to do that rather than do nothing. I fall back on the famous quote from Edmund Burke: All that is necessary for the forces of evil to win in this world is for enough good men to do nothing.” 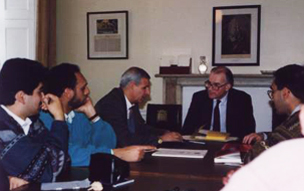