BRITISH STUDENTS INVITED TO EGYPT IN 1973

BAX (formerly known as the British-Arab University Association) started in April 1973, when a group of British university students were invited to visit Egypt by the Egyptian Ministry of Youth.

The invitation came about through the initiative of an architecture student at Cairo University, Nagia Abdel Mogney Said. Having visited Britain in 1972, Nagia decided there was a positive side to a Europe that was mistrusted by many in Egypt. She and her two friends approached the Minister of Youth to suggest inviting a group of British students to visit the Egyptian universities.

This was a time when Egypt’s President Anwar El-Sadat, who had succeeded Gamal Abd El-Nasser on his death in 1970, was introducing a radical change of course for his country. He had announced the ‘infitah’ (open door) policy towards the West, and severed links with the Soviet Union. Such changes were causing great turbulence. The Egyptian authorities were concerned about the values that would flow through the newly opened ‘door’ to the West. A prevailing stereotype of young people in Europe was of drop-outs focused on ‘sex and drugs and rock’n roll’. There was resentment of Britain’s former colonial role in the Middle East. The idea of receiving a group of young British students, with an attitude of respect, an interest in learning about Egypt, and a sincere desire to help build friendship and understanding, was a timely one.

After the first two exchange visits of 1973, many more followed. In due course the number of countries involved grew, and the nature of the delegations changed, to include a wider variety of young people, not exclusively university students.

Details of the exchanges can be found under the relevant country names. 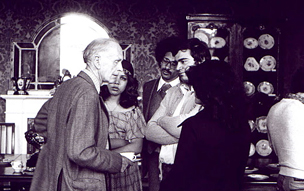 Lord Home welcoming Jordanian and Egyptian students to his home 1978