The Founders of BAX

A number of key players laid the groundwork for this first exchange visit and the many that followed. First there was Nagia Abdel Mogney Said and her student friends, and the Minister of Youth at that point, Dr Kamal Abul Magd.

Then there was Mohsen Hussein, later Under-Secretary at the Ministry of Youth, who helped host that first visit, and with his wife Lamia accompanied the return visit to Europe by 15 Egyptian students in August 1973.

Supporting the project on the British side was Bill Conner, a specialist in community-building work, with a passion for inter-faith co-operation, and for helping build trust between people from Europe and the Arab world.

He and his wife Chérie had made numerous visits to the Middle East throughout the period when official relations had been strained by revolution, the Suez crisis of 1956, and the subsequent alliance of much of the Arab world with the Soviet bloc. As a close friend of Nagia’s father, Abdel Mogney Said, Egyptian Under-Secretary for Labour, Bill had taken a group of British trade unionists to Egypt in the early 1970s. 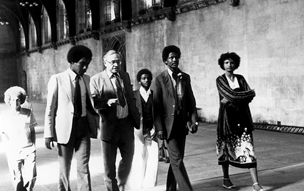