The first BAX Exchange took place in 1973 with the visit to Egypt of a British student group in April, and a return visit to Europe of an Egyptian delegation in August.

That first delegation consisted of five students from the universities of Oxford, Cambridge and Durham. One of them, Judi Conner, who later became a BBC TV documentary producer, remembers:

” The Pyramids, the ancient university of Al-Azhar, the mosques, the wonders of Luxor and Upper Egypt, feluccas on the Nile…none of us will ever forget these treasures – nor the visits to the Minister of Youth, the Al-Ahram newspaper offices, the Gezira Sports Club, or the beach at Alexandria.

It was fascinating and fun, and also somewhat daunting, knowing we were treading new ground as official delegates in a country that had plenty of reason to be wary of a bunch of naive young Brits on the loose! But it was the friendships with our Egyptian counterparts, and the visits to university common-rooms and students’ homes, that made it so much more than the conventional tourist or educational trip.

We were also impressed to find ourselves in a culture which generally accepted a more ‘holistic’ approach to life than ours in the West. Religious faith and community values seemed to be more widely accepted in Egypt as a normal, integrated part of life, not just a specialist interest for the religiously-inclined or worthy! I realised the extent of the spiritual vacuum in Western society, and the way that this vacuum breeds extreme forms of religious fundamentalism in all the major faiths. I also began to see how Western policies and attitudes have helped create desperation.”

An ambitious programme was arranged for the return visit of Egyptian students to Britain in August 1973, which became a model for subsequent visits. This included receptions at New College, Oxford and the British Council, meetings with the President of the Scottish Liberal Party, the Professor of Egyptology at Cambridge, students at Liverpool University and the General Secretary of The Socialist International.

The group also visited the Houses of Parliament, Westminster Abbey, the Edinburgh Military Tattoo (as guests of the Lord Provost) and watched a football match at the Chelsea ground.

Dr Samia Kholoussi who is now a university lecturer in the USA, said of her experience in Europe:

” It was amazing how different streams from East and West converged into an inclusive whole. Each member of the delegation became aware that we as human beings shared common beliefs and aspirations; that there was a shared interest in making the world a better place.

Our interaction with the international participants in the conference gave us a chance to see that on all issues there were other perspectives that need to be considered and debated. It stimulated the urge to explore and get to know other people’s experience. We realised that our experience and vision are Arab but also part of the human condition everywhere. “ 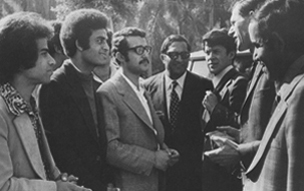 Peter Everington (second from right) who accompanied the British delegation to Egypt in 1975 speaking with Aly Elezaby (third from left) and other students from Cairo University.