In June 1997 a delegation of eight students from Bethlehem University in the Palestinian Territories came to Britain.

The group was led by Professor Bernard Sabella of the Department of Sociology. The visit was instigated by Jeroen Gunning, a Dutch postgraduate student at Durham University whose interest in the Middle East had been sparked by his visit to Jordan in 1987 as a member of a previous BAX delegation.

The programme included a reception by the Lord Mayor of Newcastle and visits to Newcastle and Durham Universities, and to Holy Island. During a weekend at Tirley Garth, the Initiatives of Change conference centre in Cheshire, they were briefed on Anglo-Irish relations by Canon Nicholas Frayling, Rector of Liverpool. In Oxford, they were received by Ruth Deech, Principal of St Anne’s College, Dom Henry Wansbrough, Master of St Benet’s Hall, Dr Derek Hopwood, Director of St Antony’s College Middle East Centre, and they addressed an audience in Oxford Town Hall in the presence of the Deputy Lord Mayor, Cllr Bob Price.

Due to the restrictions under which Bethlehem University operates, it was unfortunately not possible for them to host a return visit.

He had the idea of inviting two of the Palestinian friends he had made there to Britain in September 2002, under the auspices of BAX. The two-and-a-half week programme in the UK provided recreation and encounters with a variety of British people. Many British former BAX delegates came to meet them.

One of the Palestinians wrote on his return, ” Back in Beirut life was different. Things did not look the same as before we went to the UK. Seeing another civilisation affected my dealings with people. “ 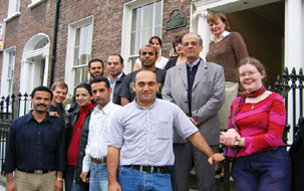