The war that had lasted for 15 years in Lebanon came to an end in 1990, and many Lebanese began to think how to repair relationships between the mosaic of confessional communities that make up the country.

One such person was Judge Ghassan Rabah, a senior judge and lecturer at the Lebanese University. He believed that ” You can rebuild buildings, but if you do not rebuild people, it is in vain “. He thought that if students from different parts of the country and different communities could travel together around Britain, they would have an opportunity to get to know each other, and develop a common vision of their country to present to others. The President of the Lebanese University endorsed his idea.

Mohammed El-Mortada, now a judge, was a member of the first delegation in 1994:

” We were six students chosen as representatives of the Lebanese people. I was there as a Shi’ite, others were Sunnite, Maronite, Orthodox, and Druze. After ten days at close proximity, I had a great experience that moved my life into a new dimension.

One of the other students was a Maronite girl, and for the first ten days there was a good atmosphere between us. But one evening, at dinner with three of our British friends, we had a discussion about the situation in Lebanon during the war. And suddenly the crash happened! My only concern was to prove that the Christians were wrong and the Muslims were right, and she did the same.

When we returned to Beirut, I was still very disturbed by the incident. I started to realise what we grew up with in Lebanon, especially during the war. In the family, in the neighbourhood, at school, with relatives, the situation is: be a Christian but without an understanding of your Christianity; be a Muslim but without an understanding of your Islam; be a person who carries a label – Muslim or Christian – yet holds within him all the hatred from history and from the present; say that the other is not like you, he is different.

We decided to do something about this. We, Christians and Muslims, young people, met. We had an honest dialogue based on true friendship. With cool hearts and minds, we discussed things that were considered beyond discussion. We met to eliminate our prejudices and misunderstandings, which led us to fear and then to hate. We wanted a step on the way to our salvation, and healing of the wounds and the pain of the past. We wanted a new experience of love and of thinking together, so that love may unite us and our country and give us the true peace and inner peace. “

A British delegation made a return visit to Lebanon in September 1995. Among the personalities they met were the Mufti of the Bekaa, Khalil El-Meiss, the Maronite Bishop of Zahlé, Georges Skandar, the prominent Shiite cleric Sayyed Mohammed Hussein Fadlallah, minister and businessman Georges Frem, and the President of the Civil Appeal Court in Beirut, Judge Tarek Ziadé. They met a wide variety of others engaged in programmes for intercommunal reconciliation, as well as visiting the magnificent Roman remains at Baalbek, and the Cedars.

In September 2000, another British visit to Lebanon included time spent in the South, staying in Tyr with the family and friends of one of the students who had previously visited Britain.

One of this group, Ella Saltmarshe, wrote:

” Many of the Lebanese, Muslims and Christians alike, spoke negatively about globalisation, perceiving it as a political and economic project which furthered the needs of a few at the expense of the many. They spoke of the need for an internationalism based on equality and dialogue: for the globalisation of human relations as a necessary counterpart to economic globalisation. These exchanges represent a long-term investment in human relations. “

” I was deeply touched by the effect the exchange visits had on the young members of the delegations. The contact was always mutually beneficial. It established a true link of respect and trust not only between the Lebanese and the British, but also between the Lebanese themselves. Through these visits I also had the chance to discover the other face of Britain, the people’s true concern about the Middle East’s problems and their thirst to know about its people. “ 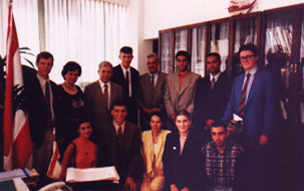