Eman Akour, a member of the 1986 delegation to the UK, and Court Correspondent and presenter for Jordan Television, wrote:

” The visit helped me greatly in understanding Western culture. Before that, I can’t deny that I had some misconceptions about the people, their traditions, and the way they looked at the Muslim and Arab world.

But later, through our various visits and meetings with ordinary people as well as officials, a big part of the confusion was clarified.

Upon my return, I told my colleagues and friends about the hospitality, about the kind and warm people I met, and the many things that have been misunderstood due to the lack of direct contact with people in the West. Each part of the programme and each person I met left a memory and impression that I cherish. Staying with families in their homes were some of the most beautiful experiences I have ever had. It made me understand that whatever the differences in culture and religion may be, it is the bridges of understanding and mutual respect between people that build nations. “

During their visit to Jordan in April 1987, six British students met HRH Prince Abdullah (now King Abdullah II) and the Minister for the Occupied Territories.

The programme for the British group visiting in 1989 included visits to three of Jordan ’s four universities, and interviews in Amman with the Minister of Information, the Director of the Department of Palestinian Affairs, and the British Ambassador. There were visits to Aqaba, Petra, Jerash and the Dead Sea, and to a Palestinian refugee camp.

A group from the Jordanian University of Science and Technology (JUST) visited Britain in September 1990, a time of great tension because of the ‘intifada’ in the Palestinian Territories and Iraq’s invasion of Kuwait the previous month. It was not clear whether they would be able to come, but Professor Ali Zaghal, Dean of Students at JUST, telephoned a week before they were due to arrive to say that ‘Now more than ever it is urgent to build bridges of understanding’.

The late Professor Ali Zaghal, who led two of the university BAX delegations to the UK, and hosted two BAX visits from Britain wrote:

” Our picture of the British people is that they are conservative, thrifty, and not without a sense of superiority. But I have found during my contact with those overseeing the programme, host families in various parts of Britain, government officials, councillors, civic dignitaries and university professors, that the British are an open, generous and intelligent people, who respect others.

Among the highlights of these visits, I remember the beauty of the British natural scene with its gentle air and the perpetual greenness and plentiful water which God has granted it. I remember meetings with MPs in the House of Commons, an evening in the home of one of our hosts in Wales, and spontaneous musical evenings employing a variety of instruments (even kitchen implements!). I recall the amusement caused by my reply to the welcome of a young Scottish MP when I said,“We in Jordan share with you the experience of being colonised by the English!

I noticed changes in the attitudes of the students who took part. What was most apparent was the development of openness, tolerance, esteem and respect for the other. This was particularly noticeable in one of the students who was very religious in attitude and behaviour. Their exposure to various points of view, and interaction with people of different origins and cultures, influenced them towards co-operation and tolerance, service to humanity and voluntary work. Some of them have remained in contact with their counterparts in Britain. “ 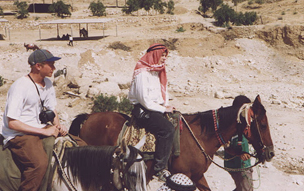