Their visit took place during Ramadan and as they declined to take advantage of the travelling dispensation that would have allowed them not to fast, their hosts went to considerable lengths to assist them, organising meals before sunrise and after sunset. The commitment of these young people to observing the stipulations of their faith made a particular impression on their hosts in Scotland – particularly in view of the long summer days and short nights.

A group of four British students and recent graduates made a return visit to Sudan just before Christmas 1981, accompanied by Peter Everington and Peter Riddell of BAX.

A report to the National Committee records that a ‘warm comradeship had developed with the Gezira students who had escorted them over the tough terrain of the Central Region, and then steered them skillfully round the riots in Khartoum for their appointments with a Cabinet Minister and others’!

” A small group of British and one French student left a cold European winter and stepped out of the plane into the searing Sudanese heat in Khartoum. The severity of the climate and the flat landscape was more than offset by the extremely warm welcome of the Sudanese students who were our hosts at the Gezira University. Copious quantities of tea, really tasty spicy meat, salads and flat bread became our new diet for the next 10 days. Our programme of visits included meeting university professors, government officials and religious leaders, but our deepest experiences were with the very fine north Sudanese students.”

Peter Vickers, now Chairman of Vickers Oils, Leeds, wrote after his visit to Sudan in 1983:

” The hospitality and friendship that we were offered made a very deep impression. For example, we were given front-row seats at a wedding of two people whom we had never met – our various efforts on the dance floor provided entertainment for the other guests! Everywhere we were treated as honoured guests. The students became close friends.

I believe I understand much more how the Arabs feel towards the West, especially about Palestine and Israel. I had no idea how deeply people feel about the issue. The British government is a) held responsible for the creation of the problem, and b) classed as an imperialist power to rank with the USSR and the USA, at the bottom of the pile. These were rather new perspectives.

Given the profound disagreements of our hosts with British Government policy, the personal warmth and friendship we received was even more astonishing. “

In June 1983, eight Sudanese students came to the UK, representing the Student Unions of the Universities of Khartoum and Gezira.

Both unions were now controlled by the Muslim Brotherhood, and a private BAX report described the visit as one of the ‘most harmonious’. Their ‘open-heartedness was in contrast to the mostly negative image of such groups in the Western press’.

The last British delegation to visit Sudan before the civil war began to seriously affect the North was in January 1986. The 40-strong Council of Khartoum University Students’ Union, all members of the National Islamic Front, gave a reception, and described the delegation as giving hope for a fruitful Muslim- Christian partnership.

One of the Sudanese commented:

” We have heard that Britain is in spiritual and moral crisis, yet you have introduced us to people who behave like exceptional Muslims. “ 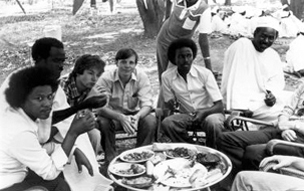 The British BAX group hosted at a picnic by the leaders of the Gezira University Students Union, New Year 1982